How good are people at determining cause, effect and migraine triggers? (Not very good.)

Consider the fascinating, but disturbing results of a psychology experiment 1 Jay Olson recently conducted at McGill University in Montreal, Canada.

What happened next is the unsettling part. Olson then asked participants what prompted them to choose 10 of hearts? A large portion, 90% of participants were absolutely convinced they knew. According to Olson, one person said, “I chose the 10 of hearts because 10 is a high number and I was thinking of hearts before the experiment started.” Another said, “because the card was nice and bright“ and a third commented, “because hearts are a common symbol.”

Our inability in distinguishing certain types of cause and effect is especially relevant for people with migraine because physicians commonly advise their patients to figure out triggers associated with their attacks and develop avoidance strategies. A problem with this approach is what psychologists term “confabulation” namely, when misinterpreted memories lead humans to be convinced they know the answer but in fact don’t.

In an on-going N1‑Headache™ study, we are in the process of building the largest database of factors and symptoms scientifically associated with increasing (triggers) and decreasing (protectors) an individual’s chance of getting a migraine attack. Consequently, we are now in a unique position to answer a simple question: How good are people at determining their own migraine triggers 3 ? Our answer is based on comparing the data of hundreds of migraineurs who believed they knew their triggers before using N1‑Headache™ with the trigger associations found after using N1‑Headache™ (i.e. applying a statistical analysis based on three months of daily data that tracks symptoms and exposure of commonly believed migraine factors). 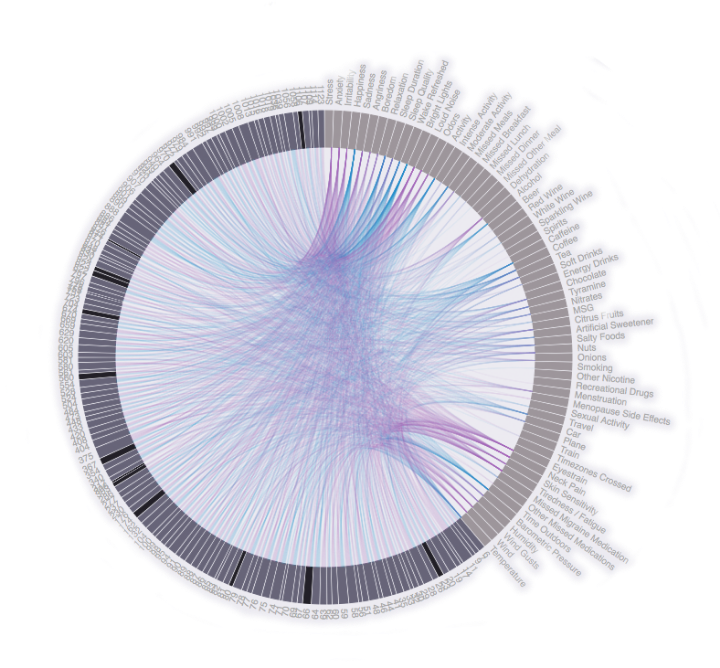 The average accuracy was surprisingly low. On average, people correctly determined less than 20% of their triggers. Some factors were accurately identified as triggers more frequently than others: stress and sleep quality (and fatigue) being the leading ones. The accuracy of others, especially dietary factors fared poorly. Generally, people correctly identify a few of their triggers, are not aware of others and are needlessly avoiding other factors. These results are supported by other research studies. Dana Turner of Wake Forest Baptist Medical Center and co-author of a scientific paper 4 titled “Natural experimentation is a challenging method for identifying headache triggers” is quoted as saying: “People who try to figure out their own triggers probably don’t have enough information to truly know what causes their headaches.”

Considering that many people have had migraine for decades and firmly believe they know their triggers, less than 20% accuracy is an eyebrow-raising result. Are we really all that bad? Well not everyone is; from the hundreds of individuals we analyzed there were two individuals with above a 70% accuracy. We interviewed both of them: highly self-aware females who had migraine for decades and had meticulously kept diaries for more than five years. One of them, Sharron Murray, is a registered nurse and well-known US-based migraineur and author whom we have interviewed here previously. The second person was based in Northern Europe, although not a health care professional had a several decade long occupation of tracking inventory at hotels and restaurants – something that may have prepared her to also be good at tracking her triggers.

Apart from our faulty ability in distinguishing cause and effect there are a number of issues that can help migraineurs’ efforts to track their own triggers – and this is the subject of the second part of this article coming next week.