Will the real Mr. Average please stand up? (part 1)

We can easily recognize the face of someone we know from thousands if not millions of other humans. However, it turns out that individual differences in physical appearance are dwarfed by the biochemical differences within us. In the middle of the last century, Roger J. Williams, PhD, a distinguished American scientist specializing in nutrition at University of Texas, argued eloquently that clinically speaking, the “average man” simply does not exist.1,2 Indeed, he said the very hallmark of being human is the high degree of individual variation our species exhibits. 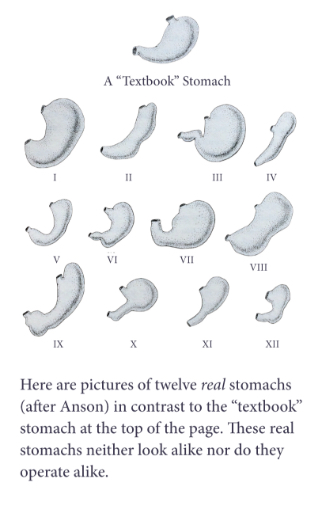 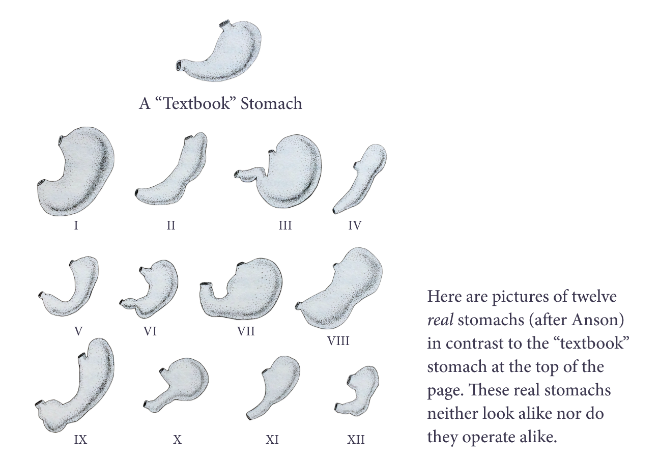 This figure from You Are Extraordinary by Roger J. Williams, PhD. (1967) originally taken from An Atlas of Human Anatomy, Barry J. Anson, PhD (1957) W.B. Saunders Company.

The variability that Dr. Williams referred to went beyond the obvious differences between individuals: sex, weight and age or even the presence or absence of a single genetic change that can alter drug response. Dr. Williams wrote: “If normal facial features varied as much as gastric juices do, some of our noses would be about the size of navy beans while others would be the size of twenty-pound watermelons.”2

Beneath this witty statement lies something less obvious and very intriguing. What Dr. Williams may be alluding to is the fact that in human evolution, millions of years of sexual selection and the desire to have mates that don’t look odd, may have acted to greatly normalize our physical appearance. Beneath our physical appearance however, our internal anatomy and biochemical machinery was never subject to such a normalizing selection pressure. Therefore, we may be greatly underestimating the anatomical and biochemical diversity that lies beneath our skin.

Today only one of his books remains in print, but at the time Dr. Williams’ studies were widely published and the importance of his work was embraced by some of the world’s greatest thinkers including the writer Aldous Huxley and the biochemist Linus Pauling, PhD (the only person to win two unshared Nobel prizes).3

And today, more than 50 years later, the medical community lacks the tools to embrace the “everybody is unique” paradigm. The current state of the industry prompts three questions. Where did our current medical “one size fits all” approach come from? How effective is it if we develop medicines for Mr. or Ms. Average? And if it is not, how could we move on to a more effective approach? 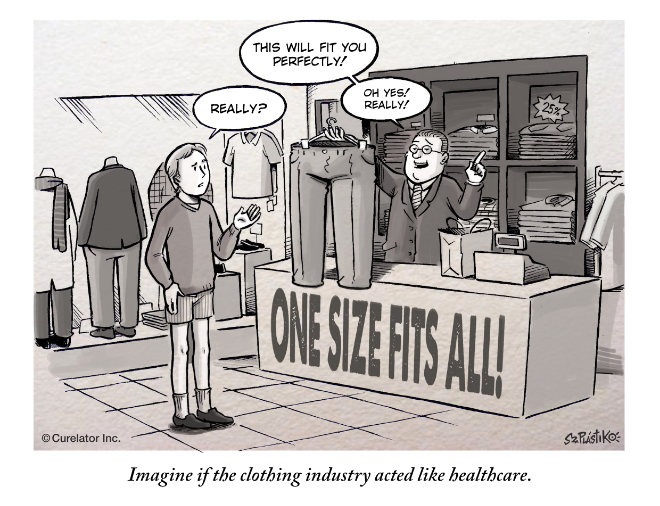 The answer to the first question revolves around the tendency to aggregate populations of people and average things into a single number (or set of numbers) that may not be representative of any individual. If other industries used this approach they would go out of business fairly rapidly. Imagine if the clothing industry only offered one size fits all.

The time in Western history when we became interested in dealing with populations of people and stamping out something that could be sold to entire populations was of course the Industrial Age. Perhaps by no small coincidence, the field of modern statistics also was born around the same time - roughly 300 hundred years ago. In medicine an average representing an aggregate population would allow one to scale and manufacture therapies for everyone. For this reason, virtually all clinical trials for therapies including drugs and medical devices are still analyzed on aggregate populations.

However, the paradigm of Mr. Average has had enormous clinical (as well as social and behavioral) consequences for humans who are outliers. If the population contains a high degree of individual variation, then any average number that is close, but maybe not close enough to be clinically useful to any given individual, is obviously a problem. For this reason a high degree of individual variation poses a serious problem for the healthcare industry.4 For example, discovering and developing custom-made pharmaceuticals targeted to a single individual’s biochemistry and that person’s particular variation of a disease is not as simple as producing a well-fitted pair of pants. One would first have to measure and decipher the relevant biochemistry underlying the disease variation of that individual and then (if a well-fitted treatment is by coincidence not available) discover, develop and monitor a custom drug in years of clinical trials (oh, and then be able to charge a few hundred million dollars per individual to recoup at least some of the clinical development costs).

Since we have not and are not able to develop individualized medicines, how bad is it really if we develop them instead for Mr. or Ms. Average - as in fact medical companies currently do? How many people are average? And for those who are not average, will those medicines work?

Fortunately, data on this exact question already exists and the results are astounding - not in a good way. Let’s look at the population performance of the top selling drugs in migraine, a classic example of a chronic disease with unpredictable but often devastating episodic attacks. What percentage of the population is effectively treated if you give them the drug in question?

How can this even be possible? The answer is that the efficacy numbers shown in the diagram do not include placebo effect. In real world drug use, the placebo effect can account for 20-50% of the response to treatment in patients (about 50% in migraine clinical trials). So placebo effect added to a mediocre but real drug effect equals more acceptable apparent results.

To be sure, nobody is against placebo effect - it is a very safe way to get real clinical benefits. But to answer our question: how effective is it really if we develop medicines for Mr. or Ms. Average? Not very.

The fact that any given drug is therapeutically effective in only a minority of patients flags a number of issues. First, how much faith can we place in any “one size fits all” therapeutic approach? Since the biochemical basis for this failure is poorly understood, shouldn’t we try to understand the mechanisms of individual disease variation that limit the “one-size-fits-all” approach? Finally, and most importantly, how can we develop better therapeutic approaches that are built upon recognition of individual variability?

Go back to articles